Australia’s Villainettes have all spent time in previous bands, providing them with ample opportunity to hone their sound – what results is nothing less than amazing. 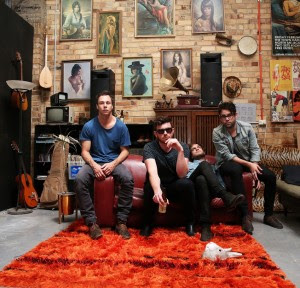 The act is able to provide new luster to the rock style with intelligent arrangements, catchy compositions, and a sense of depth that simply is unable to be found in current music. The interplay between the guitars, drums, and bass lines during a Villainettes track bolsters the replay value while quickly making fans of listeners. While each of the cuts that the band create are tremendously germane and effecting for the current crowds, the band’s overall style touches upon a wide swath of acts from the sixties, seventies, and eighties. What was once old is new again with the Villainettes – hints of Interpol, Sisters of Mercy, and the Smiths can be discerned alongside bold guitar riffs and sinuous bass lines.

Over the last few months, Villainettes have been creeping up the charts in a variety of countries – their latest batch of singles have hit the charts in the United States and broadly throughout Europe, South America, and Asia. The band is currently supporting their latest music video, Diamonds. The visual element of the track is as bright and as vibrant as the band’s effort, with the same dedication taken in the creation of a cogent video as the band takes in the crafting of their own music.

Make sure to visit Villainettes’s websites and varied social media profiles for more information about the band and hints about tour dates and new tracks. For those NeuFutur readers that are in Australia, the band will be officially launching the video for Diamonds at the Ding Dong Lounge in Melbourne – tickets are AUD $12.25 and can be picked up on OZTix. Here’s to hoping that Villainettes release a full length that captures the same frenetic energy and inimitable style that has graced their previous work. With the sheer array of styles, genres, and approaches that the band has adopted with each track, listeners will have no idea where exactly the band will take them on future recordings. The only thing that fans should be confident of is that the resulting music will be some of the most honest and earnest that they have heard, while creating a heady experience that will stick with listeners long after the recording has ceased.