Hello, Xander. How would our readers at NeuFutur know you?

XD: Well, they may know me from my debut album, Guitarcadia, which, luckily for me, received a lot of press and accolades.   The critics really seemed to have some great things to say about it, as did the fans.  I’ve also toured with my band, XDB and performed with James Rivera in his solo band, as well as in Sabbath Judas Sabbath. 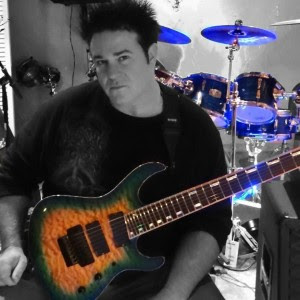 How is different between playing cover versions in James Rivera’s Sabbath Judas Sabbath from playing in XDB?

XD: Well, we play a few covers during our live sets in XDB, too.  It’s always great to pay homage to our favorite bands.  It’s also a great idea to play some things that the fans might be a little more familiar with, and then, hit them with your best original stuff.  So, probably the biggest difference would be the fact that SJS was all Sabbath and Priest songs.  The fans knew what they were getting when they came to a show, and they were prepared to rock out with that material.  With XDB, we’ve gone in and opened for a lot of bands, in front of crowds that had never heard of us, and playing the original material, as well as our few covers, we really had to win them over.  I think we were able to achieve that goal, everytime. 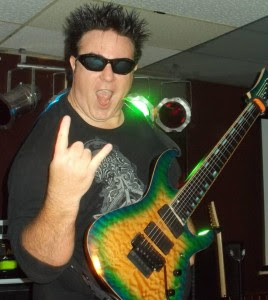 You’ve worked with some rock luminaries. Who is still out there that you would like to work with, and what would a dream line-up of living or passed musicians would you like to helm?

XD: Oh man…great question.  I’d still love to collaborate with the guys in Journey, in some fashion.  Whether it would be to perform live on stage with them, or opening for them, at some point.  Dream lineup: Steve Perry on vocals, Neil Peart on drums, Billy Sheehan on bass, my current keyboard player, Jeff Morris on keys, and Neal Schon as a second guitarist.  How’s that sound?

What were the most challenging and fun tracks to record on Guitarcadia?

XD: It was all a challenge and a blast at the same time!  I think the ones with vocals, like “Boys of Summer” and “Under a Darkened Sky” were probably the most challenging, just because you’re dealing with the added vocal factor.  The other tracks were all instrumental, so when you add in the vocalist, it’s a different set of circumstances.  “Lady In Red” was also a challenge, just because it’s a little bit different and out of my comfort zone.  I had to tone down the shredding stuff and really dig deep on the melodic and lower key style of playing.

What does your instrumental set up look like for a XDB recording session?

XD: We usually set up in one room and cut everything live, then do any overdubs that need to be taken care of.  So, we cram drums, bass, keys and guitars, as well as the vocalist, into one room for initial tracking and scratch vocal.  It’s not a small room, at all…we record at my own studio..but it’s not a massive room, either.  It gets the job done.

What memorable times have you had on the road?

XD: Probably the most memorable times, so far, would be the cross country trek to Nebraska and Denver last year for Skull Fest and Wolf Fest.  Both were amazing shows, and we got to play with some of the artists that I’ve admired for a long time.  To be on the same bill with some of these guys that influenced you and that you looked up to early in your career is a real adrenaline rush.  Very happy to have been able to do those shows.  They will always hold a special place in my memory.

How supportive is the Pittsburgh metal and rock scene?

XD: Pittsburgh is a rock town.  Period.  There are some other great rock towns like Philly and Cleveland, but Pittsburgh loves their metal.  We’ve been honored by the Pittsburgh fans, with a bunch of Iron City Rocks Pittsburgh Music Awards last year.  For that, I’m extremely grateful.  Every time we take the stage to open for an act coming through town, the crowds have been insane!  I think they have gotten better and better every time…the last gig we played, opening for Stryper was just amazing.  I love Pittsburgh, and we’re happy to call it our home.

How would individuals hear samples of your music?

XD:  It has definitely helped to spread the word and reach a mass audience, without having to tour as much, which can be extremely costly.  It has also enabled us to really connect with the fans and the music lovers.  We can get a better idea of what they like, what they want, and what they expect from their favorite bands.  Youtube has really been a gift..being able to share concert videos and performances with fans from all over the world.

Do you have any more thoughts for NeuFutur?

XD: I’d just like to thank you for having me.  I hope that your readers will take a moment to check out the music, and if they like it, I hope they will become a fan and support the music, by purchasing it and telling their friends, too.


Xander Demos Interview
Posted by NeuFutur Magazine at 7:04 AM