Bird Song is the latest effort from Canary Burton, and it is one of the best albums we have heard this year. The One & Future Star has a wonderful opening that gradually expands into something that could be present in a Tim Burton film; there are so many things happening (And not happening) with the effort that listeners will continue to find new twists and turns after a fifth or a sixth listen. 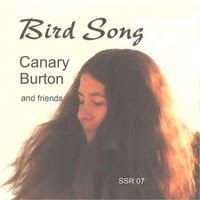 Early in the Morning is a track that begins in a very classical, choral way before gradually adding more current and contemporary vocal harmonies; the ability of Burton to make fresh what had been ignored is a talent that shines through at a number of points during Bird Song; Nightfall in the City is another example. The slower, more emotional tack taken during this effort allows botht he instrumentation and the vocals to further a cogent and coherent narrative.

Raggity Three Step is another gem amongst precious stones, allowing the piano ample opportunity to shine; the complexity of the arrangement here showcases a level of mastery that is comparable to those exhibited in a symphony. Bird Song is an album that showcases a varied set of influences, stylistic decisions, and overall sound to each of the album’s compositions that represent the idiosyncracies of Burton; the tracks are crafted with such care that Bird Song will continue to be spun even after repeat listens. Bird Song is available for purchase from Burton directly; make it a point to visit his domain for more information about his concerts, resume, and samples from Bird Song.

Top Tracks: Early in the Morning, Nightfall in the City