True Blood is one of HBO’s flagship shows and is a rare example of a drama that maintains its freshness after seven seasons. The ultimate season has been rounded out through the inclusion of a number of more than capable guest and supporting stars making the 10 episodes of the final season extraordinarily easy to watch. In November HBO will be releasing The Complete Seventh Season box set on Blu ray and DVD (along with a full-run box set of the show), making it easy to collect last season of the show and a convenient package. The video quality of this box set is superb with each of the episodes recorded onto disc at the same quality that they were originally shown on HBO. 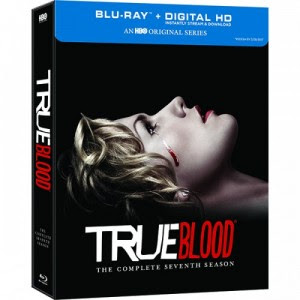 The audio quality is spectacular ensuring that viewers will be easily able to discern all of the dialogue that furthers the plot and begins to tie together the loose ends created through the last few seasons of True Blood. The box set contains a number bonus features making it a tremendous buy for anyone that is a fan of the show. These features – five audio commentaries, an examination of the final days on set, and an intricate list of the variety of different relationships between the characters together provide additional context for fans of the show and provides a rare look into the cast and crew behind this vampy effort. True Blood: The Complete Seventh Season Blu-Ray and Digital HD will be available on November 11th for purchase – make sure to visit your local video store or favorite online retailer to reserve your copy of this release today. Expect to spend about $60-80 on True Blood: The Complete Seventh Season which for our money may be the best stocking stuffer that one can receive this holiday season.