This may be the first item that we have received that is marketed for the 2014 holiday rush. It makes all of the sense in the world that this release would be surrounding one of television’s favorite shows, Duck Dynasty. This box set captures seasons 4 through 6 in a format that is easy to watch and encapsulates what has happened to the Robertson clan over the course of the last few seasons. The video quality of these episodes is identical to those provided on broadcast television and do not possess the commercials that the original release of the show. 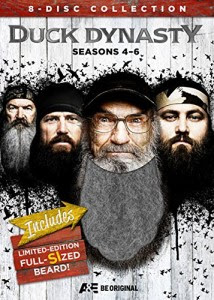 This would be a perfect gift if only the episodes were included but Lionsgate has included a Si-sized beard with each collection. This would be a perfect purchase for anybody that is a fan of Duck Dynasty or is just wanting to catch up with the show. That DVD set is available at a wide variety of online and brick and mortar locations. Expect to spend about $35 on the Duck Dynasty Season 4 – 6 DVD Box Set. Make sure to visit Lionsgate.com for further information about the company’s properties and subsequent releases.