This compilation links together some of the most airy and serene creations in the Real Music catalog, ensuring that Angels of Hope is a title chock-full of the biggest names in new age music. Kevin Kern, Omar Akram, Sacred Earth, Gandalf, and Liquid Mind are all represented. Despite the sheer differences in styles, this album works. 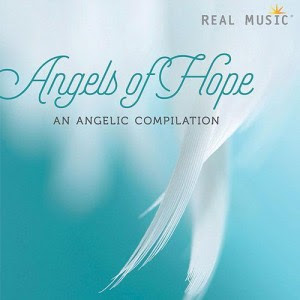 And the Light is Forever is a brief but wholly immersive composition by Kevin Kern, representing a delicate arrangement that will have listeners hanging on every note. The track leaves as quickly as it starts, allowing for Peter Kater to move into the eight-minute Heaven’s Window. The composition may have a slower tempo than the previous tracks on Angels of Hope, but the sheer breadth of the track is impressive. This track conforms nicely to the compilation’s theme as hints of choral music can be heard among the ethereal arrangements. A call and response is used to great impact during Heaven’s Window, ushering in the next segment of the disc. The disc is able to stay strong with Danny Wright’s Angel Voices. Angel Voices will require listeners to play the song multiple times to hear the numerous things that are occurring at any point; the track may only be four minutes but occupies such a larger space on Angels of Hope.

Gandalf’s In the Presence of Angels has a delicious blend of the organic and the electronic through a heartbeat-like beat initiating the effort. The track opens up to include a flamenco-like approach and a softly sang phrase that repeats the title. The track works well with the more traditional types of compositions included on Angels of Hope, but Gandalf created something in this composition that could garner airplay in a fashion similar to Enigma or Enya. Angels of Hope is a must-have compilation for anyone that needs a pick-me-up for the weariness of life.

Top Tracks: And the Light is Forever / Kevin Kern, In the Presence of Angels / Gandalf


Angels of Hope: An Angelic Compilation CD
Posted by NeuFutur Magazine at 8:52 AM