Where does your band name come from?

Dave New:  I’ve always been inspired by literature and Graham Greene has always been one of my favorite authors.  His first release back in the early 1900’s was a volume of poetry entitled ‘Babbling April’ which was critically panned and quickly got pushed out of print. 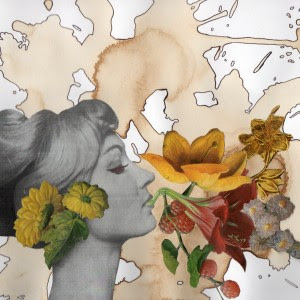 Of course he went on to become one of the most diverse and celebrated novelists of the century, and now those first editions of ‘Babbling April’ are worth thousands of dollars.  To me that story is a testament to power of following through on one’s impulse to create.  There are so many barriers standing in the way of being a band playing original music these days.  The name is a reminder of what is important in continuing to create.

You released an eponymous EP before Valentine’s day. What do the six tracks on the release say about Babbling April?

DN: In sculpting a release I try to carve out a space for every aspect of music that I love, so you could almost view this EP as an outline for the world we are trying to create with our music.  The challenge then becomes, how to integrate the influence of pure pop tunes with dirty garage rock?  How can I fit a post rock element in there and have it all work together as a whole?  These are the kinds of interactions that I think are interesting to hear play out on the EP, and will continue to be wrestled with moving forward.

Nancy Jane Epling created the front art for your EP. How does her art capture your music?

DN: Nancy is an amazing artist out of Athens, OH, and a personal friend of ours, so we had complete confidence in her when we asked her to put something together for the record cover.  She was adamant about trying to capture that feeling of spring and newness you hear on the record, and also the feminine aspect that comes through not only in Vivi Machi’s vocals but also some of the more vulnerable instrumental passages.  The song title “On Breath From Esmé” is an allusion to the artwork Nancy created.  You can see more of her artwork here: nancyjaneepling.weebly.com/.

One of the hits on your EP is Sunny Day Records. The track has a literal meaning, but did the music of Sunny Day Real Estate play any role in the title?

DN: I can’t say I’ve listened to much Sunny Day Real Estate unfortunately- they were a little bit before my prime and somehow just never made it into my record player in the years since.  The title of that song is kind of a pun, in that the events described are literally a record of a sunny day, yet it is also a record that one would put on on a sunny day in the musical sense.  I probably shouldn’t call attention to the puns in our music…

Dayton has had a number of acts break nationally in the last decade. What does the current independent music scene in the city look like?

DN: The current scene in Dayton is deep and diverse, but these days at least it feels like it exists in a kind of bubble.  It has been a long time since the heyday of Guided By Voices and even still you don’t see Robert Pollard back here often to play shows.  I can rattle off a number of bands here that are putting out amazing records and are absolutely killer live- Motel Beds, Speaking Suns, Manray, It’s People, Grenades?!, Dinosaurus- the list goes on.  If we were in a large enough town to attract a higher amount of national acts and attention to our small city, I think you would see the lid getting blown off a lot more Dayton bands.  Go check a couple out!

What is the ultimate goal for Babbling April? What does the remainder of 2015 hold for the band?

Our goals are pretty simple, make good records and play good shows.  The rest, unfortunately, largely falls out of our hands.  We believe that if we take care of those two things than larger and larger audiences will follow, and lead to bigger and better things.

Bandcamp has been a boon for many bands. What relationship has the band had with the service?

DN: I don’t see a ton of new fans coming from Bandcamp per se- the real attraction of using the Bandcamp platform is that they cut the artist a really solid deal.  That said, our EP is available on iTunes, Amazon- all the major online retailers- because we realize some people may be more comfortable getting their music in those places.  The bottom line between the two however is that if you buy it on Bandcamp you will pay less money and we will still get a larger cut.  It is a win win.

How can our readers find about the band and hear some of your music?

DN: You can follow us on Spotify, Facebook, Twitter, Soundcloud, sign up for our mailing list, or move to Dayton and become our personal friends- all are viable ways of keeping in touch.  As I said above our music is available from all major retailers, and you can find all of these links at www.babblingapril.com.

Do you have any final thoughts for us at NeuFutur?

We love what you do and really appreciate you having us on the site!  Hopefully we can get you all out to a show sometime.

Thank you for your time.