Hello, K. Tha Producer. Your current mixtape (out 3/27) is The Therapist. What significance does the mixtape’s title hold for you?

The title of the mixtape came about from just listening to what most people were saying music does for them. 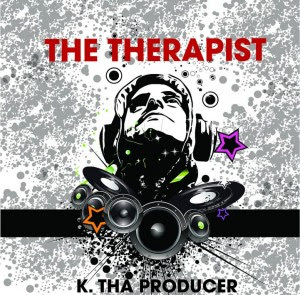 Many fans that I talked to or read tweets from, said that music is a form of therapy for them. It relieves their stress, makes them happy, sad, relieved, or just brought out strong emotion. As a producer, I wanted to create music that brought out these exact feelings in my listeners. If music is therapy, then I must be a therapist lol.

You do a very interesting thing with this release, which is put forth a wholly instrumental mixtape. How does your mixtape differ from a collection of beats?

My beats are not the typical hip-hop “beats” you hear on the radio or even on other underground rap mixtapes. My beats are the beginning of me developing my own sound. I use a variety of sounds (while still trying to sound current and modern), that are meant to be the groundwork for my “K. Tha Producer sound.” On one of my beats, “Lonely Road”, I use a vocal sample in the beginning from a pop song from the 2000s. That is not something a lot of other independent hip-hop producers are doing.

My creative process is pretty simple. I usually start with a melody or a nice drum sample and build on the beats from there. I like to use my drums as the bottom layer of my beat, then the instruments as the second, and if I am working with an artist, the vocals at the very top. I usually go into the studio with an idea I thought of earlier, or just make something up on the spot. As for the set up, I just use my laptop, monitors, and my Ableton Live 9 music production software.

How have you evolved since your first composition? What was the specific reason you began creating music?

I have come a long way lol. I would say that I am still evolving. I am still learning how to grow and develop as a producer, and create better beats, mixes, and get better with vocal production. I will make an instrumental, listen to it several times, and still say, “I can do better.” I began producing music in 2011 with my two younger sisters. One of my sisters is an aspiring singer/songwriter, and she wanted to record an album. Since me and my youngest sister were both interested in production, we decided to produce her first album by ourselves. I learned how to use Ableton Live in one week and we finished the album in only two months. It was a lot of hard work, but definitely worth it. I have not stopped making music since then.

What are your favorite tracks on The Therapist (and why)?

Would you consider having an additional release of The Therapist utilizing flows / singing from other performers? Who would you ultimately like as a featured vocalist/rapper on one of your songs?

Definitely. I would love to release a part two of The Therapist featuring some talented rap artists. I am from Peoria, Illinois, and there are so many talented artists that I would love to collab with. Also, there is a rapper named Mystery Cipher out in Boston, Tray Stacks in Chicago, and a rapper named Jug in Arkansas that I definitely want to make music with very soon. Actually, Jug is planning on releasing a mixtape featuring one of my beats called “The World is Mine,” which is on The Therapist, so I will be excited to hear his vocals on that!

Twitter has probably been the most successful for me. I have met engineers, artists, magazine editors, graphic designers, music industry insiders all from this website. It is amazing! I still believe that face to face meeting is important to having a successful music career because it gives you a better chance to bond and really see what the other person is about. However, sites like Soundcloud, Reverbnation, and Twitter are great places to connect with people.

I am really looking to meet with new artists, more industry insiders(ex. Managers, A&Rs) and really take my sound further. I plan to release more instrumental mixtapes and travel. I want to have my music in television and film, so I am just working hard this year to make all of that happen.

If there are any artists currently looking for a producer to work with, feel free to check out some of my beats and contact me by email about working together, kmakesbeats@gmail.com. I also write press releases for artists to promote their latest music, upcoming shows, events, etc. I can be reached by email about those also.