The sad fact about sours is many of them are priced at a level that makes it hard to have them as a go-to beer. Even those sour beers that have been made in the United States can break the $20 mark for a 22-ounce bombers. The beer pours with a dark mahogany to reddish coloration and a light tan head that stands out on the top of the beer. Lacing winds its way down the glass as one continues.

Soulless, one of the newest year-round offerings by Cincinnati’s Rivertown Brewery is a Flanders style beer that contains a panoply of bold flavors to provide individuals with an approachable effort that does not cut corners. The beer’s nose is fairly innocuous, with only a slight sourness that can be discerned. The initial sip of Soulless is like an explosion in one’s mouth, with red wines (syrah, pinot noir) and vinegar reigning rampant. Soulless continues to provide one with a sweet element at the backend of the beer, refreshing one’s palette and preparing it for the next constellation of flavors. Deep and dark, Soulless is a beer that will continue to yield new flavors, interactions, and overall tastes each time that one cracks a beer. As this Flanders-styled effort continues to warm, some of the more tart elements fade into the periphery to allow for sugary, toffee, and plum flavors to take over.

Soulless is available in 12 ounce bottles and in four-packs anywhere where you can find Rivertown efforts. Visiting the brewery’s Facebook or Twitter will provide imbibers with the latest in information about the company’s seasonal offerings and events at their brewery. 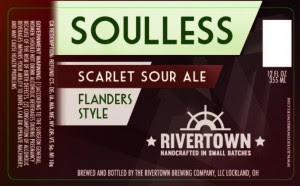