Strike’s Imperial Red pours with an incredibly dark brown / reddish coloration and a small amount of light brown to tannish head. The beer possesses a full compliment of twists and turns that will ensure that individuals can complete the entirety of a 22 ounce bottle. There is a considerable amount of malt here that is able to moderate a decent amount of sweet elements. A little hopping of the Imperial Red makes the beer well-balanced without leaning too far in any one direction. 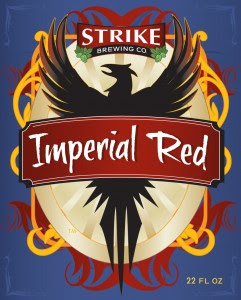 There are a decent amount of dark fruit flavors that one can pull out with this beer, meaning that as one continues down these 22 ounces that hints of prune, fig and date can all be discerned. Strike has pegged this offering at 6.5%, a rate that allows the sweeter elements of the beer to fade into the periphery. Strike’s Imperial Red is a beer that fans of the Irish Red style can appreciate, but has enough in the way of twists and turns that those that have had their fair share of brewery offerings can find something to appreciate. The beer stands up well to an increased temperature; the different array of flavors that are present when one starts the beer, gets halfway through the effort, and concludes this bombers means that one will stay interested from beginning to end. Strike’s Imperial Red is one of the best reds that we have reviewed at NeuFutur and should actively be searched out by anyone that is a fan of the style.

For more information about the whole constellation of beers that Strike releases, visit their domain at strikebrewingco.com . Individuals that are interested in the latest news and information about the company’s current offerings would do well to check out their Twitter or Facebook profiles.