Abbey’s Single pours with a hazy yellow coloration and a considerable amount of carbonation. The whitish foam on the top stays throughout the beer. The light amount of bitterness that the beer presents is quickly moderated by sweeter fruit and malt elements. The fruit elements link together peaches and cherries along with a buttery and peppery end. 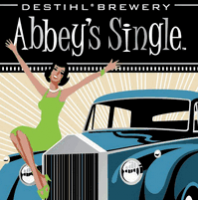 Abbey’s Single’s twist at the ending ensures that imbibers are provided with a fresh palette each time that they pick up a can or glass of the Abbey’s Single. The beer is a hair shy of ther 5% ABV mark, ensuring that individuals can drink a few Abbey’s Single or other Destihl efforts over the course of the night. The beer is something that a wide swath of individuals could appreciate, with a gentle enough flavor to convert fans of the lager format but possesses enough in the way of nuance to keep even those well-versed in the Belgian tradition interested in what Destihl is doing.

Make sure to visit Destihl’s brewery and restaurant should you find yourself in Bloomington, Illinois; the company’s year-round and seasonal efforts are present on their domain.