Upside Out, a new EP from OK Go, will be released on June 17 by Paracadute. The collection features four original songs from the GRAMMY-winning band, including the bittersweet “The Writing’s On The Wall,” which can be heard in The Amazing Spider-Man 2, which was No. 1 at the box office in its opening weekend.

The EP’s four tracks were pulled from the band’s sessions for its forthcoming studio album, Hungry Ghosts. “The Writing’s On The Wall,” “Turn Up The Radio” and “The One Moment” were recorded in upstate New York with Dave Fridmann (The Flaming Lips, MGMT, Tame Impala), who produced OK Go’s Of the Blue Colour of the Sky (2010) and the 2011 live collection 180/365. “I Won’t Let You Down,” which oozes with made-for-the-dance-floor retro-funk style, was produced by Tony Hoffer (Beck, M83, Depeche Mode) in Los Angeles. See below for track listing.

OK Go will be blending old favorites and brand new songs on a coast-to-coast North American headline tour, which will launch on July 15 in Sacramento, CA and include Los Angeles area shows at the Troubadour (July 22) and The Echo (July 23). The band is known for pulling out all the stops in its live performances and this run, in particular, will be packed with surprises and new interactive elements. See below for the initial itinerary; additional dates will be announced.

Hungry Ghosts, OK Go’s first studio album in four years, will be released in the fall of 2014. This off-the-cuff clip whittles the making of Hungry Ghosts down to a scant two minutes yet conveys the album’s broad sonic scope.

“We don’t have a regular writing routine,” says singer Damian Kulash. “It’s more of a whatever-it-takes hunt for those songs that are just beyond our conscious grasp – the ones with all the feeling in them. It’s like trying to scratch an itch in your brain, trying to reach those songs – like trying to grab something in your peripheral vision. So we go at them from a million angles and we wind up with a lot of disparate influences colliding. This album has moments of Aphex Twin bumping into INXS, and New Order piled on the Jackson 5. And as unlikely as those combinations are, it’s the closest thing we’ve made, so far, to the music playing in our own minds.”

Eager to create a more engaging and interactive experience for the fans in the run up to the album release, OK Go has partnered with Pledge Music to create an elaborate pre-order campaign for Hungry Ghosts that launches today.

“The album is done, so this isn’t a fundraising exercise,” explains Kulash. “But by teaming up with Pledge Music, we are able to offer all sorts of cool stuff as part of our pre-order we wouldn’t otherwise be able to.”

The campaign offers such perks as a custom, modular, analog synth and music box that plays an exclusive OK Go song (a collaboration with Little Bits and Korg), a custom (and presumably fake) short-form documentary about the fan who’s purchased the package,and the opportunity to arrive at an OK Go concert on the tour bus with the band. Fans who pre-order Hungry Ghosts through the Pledge Music campaign will automatically receive a free download of the EP Upside Out. Further details are available HERE.

On May 16, OK Go’s Damian Kulash will be on hand to celebrate the opening of EMP’s newest exhibit, “Spectacle: The Music Video.” Located in Seattle, WA, EMP is a leading edge, nonprofit museum dedicated to the ideas and risk-taking that fuel contemporary popular culture. The evening will kick off with an OK Go video retrospective followed by a Q&A with Kulash, who will also be a keynote speaker at the national Illustration Conference (ICON), which takes place July 9-12 in Portland, OR.

OK Go is at the forefront of an emerging class of independent creative entrepreneurs making art across numerous disciplines, hop scotching over the boundaries of content classifications in order to best realize the vision at hand. Or, in the words of Kulash: “We’re working to create a 21st century company that just makes cool shit.” Paracadute, founded by the band in 2010, has since released OK Go’s Of the Blue Colour of the Sky Extra Nice Edition and 180/365 as well as recordings by PYYRAMIDS, Lavender Diamond and Infinity Shred and the word game app Say The Same Thing.

The band’s groundbreaking approach has netted numerous honors, including a GRAMMY, a CLIO, two WEBBY awards (including one for their collaboration with The Muppets and Sesame Street), a spot in a Guggenheim installation and a total of seven Lions from the 2012 Cannes Lions International Festival of Creativity – the advertising world’s most prestigious competition.

Turn Up The Radio

The Writing’s On The Wall

I Won’t Let You Down

Additional dates to be announced. 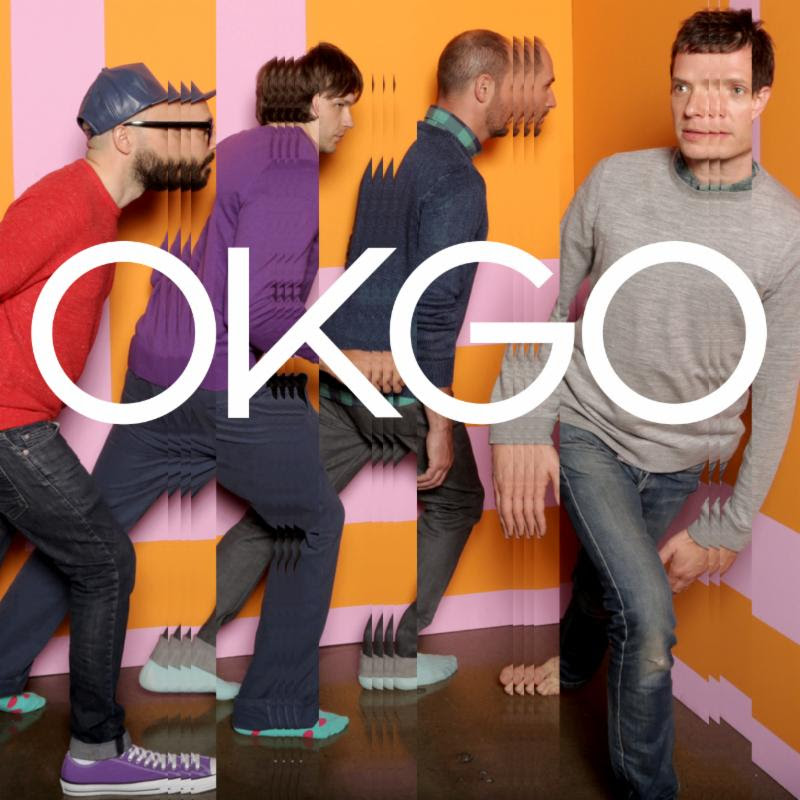