The close-knit area in which Unity Vibration operates yields some amazing beers, and we were lucky enough to stop by during their hours to see where the magic goes down while drinking some of the most innovative beers that we have tasted. For those that suffer with celiac syndrome or have chosen a similarly-restrictive diet, Unity Vibration’s gluten-free efforts will be much appreciated. 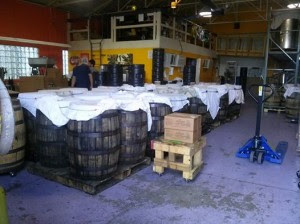 A large amount of black plastic containers – one way kegs – represented biodegradable ways to transport their efforts.  Below these kegs were line after line of barrels in which future kombuchas were aging. A raspberry-heavy barrel had red-tinged hops, while each were tightly bound with covering to ensure for the best possible condition. Unity Vibration is able to utilize fruits, herbs, and other natural elements to give further spirit to each of their efforts  – “giving [us] the freshest flavors.” 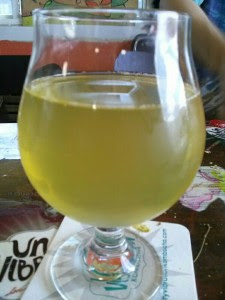 Their tasting room had a number of stellar efforts – they had their Kombucha Pale Ale, ginger and Honeysuckle Charlie. The Honeysuckle Charlie is one of their newest teas, and presented imbibers with sweeter melon and sugary notes. Their ginger kombucha beer linked together sweet and spicy elements before providing an ample amount of tartness to conclude the effort.

Sitting near their bar was a SCOBY – symbiotic colony of bacteria and yeast, which represents the backbone for the kombucha. This colony will make its way into an effort to be released later this year – a Kombucha Cream Ale that will be in incredibly high demand. Consider yourself lucky if you can pick up a bottle before it flies off of shelves. Unity Vibration describes the effort as a complex and brighter take on the cream ale format. Make sure to visit Unity Vibration’s tasting room or see them at the Michigan Brewers’ Guild Summer Beer Festival, July 25th and 26th in Ypsilanti.