Hitler and the Nazis DVD Review

Hitler and the Nazis is an incredibly detailed look into the rise of power of Adolf Hitler, and it does so in a fashion that provides viewers with the full story. Rather than focusing on the beer hall putsch or World War II, Hitler and the Nazis goes from the beginning until the end. 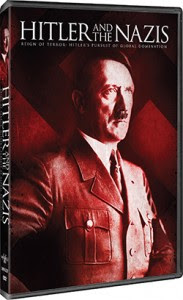 The black and white footage shot during these years is supplemented with an incredible amount of eyewitness interviews from those that were actually on the ground. The feature is spread out over nearly five hours (286 minutes) and would be enjoyed by history buffs as well as undergraduate students of the discipline.

I believe that Hitler and the Nazis is better than other documentaries that purport to get viewers in the mindset of Hitler because it gives equal shrift tot all aspects of Hitler’s life. While there is a decided focus on the Nazi party years, the aspects of Hitler’s life pre-1937 represents a considerable amount of the feature. Chris Andrews’ narration of this title is fair and balanced, and has enough change in his inflection to keep individuals interested through the entirety of Hitler and the Nazis.

Hitler and the Nazis is available in a single-DVD format for around $30 after taxes from any number of online or physical movie shops. Visit the Cinedigm website for additional information regarding their releases in a variety of home entertainment genres. This release would be a perfect pick up for anyone that wishes to have more of an idea about one of the most infamous individuals in recent memory.


Hitler and the Nazis DVD Review
Posted by NeuFutur Magazine at 6:45 AM