Can you briefly introduce yourself to our readers at NeuFutur?

Which genres and performers most influenced you during the creation the tracks on your album, Haunt? 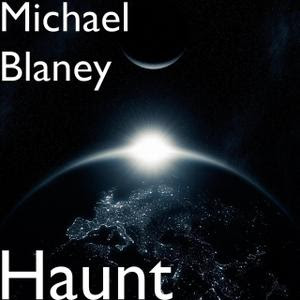 I have always been a huge fan of HEART, MARILYN MANSON and ANI DIFRANCO.  So I think there is a little influence from them all.

Briefly describe for us the process of grouping the tracks on Haunt. How did you choose and order the tracks, and how do you move from initial thought to recording the track?

I am not a singer at at all, I went in and recorded 60 songs to show off my producing and writing and music skills.  I played all the instruments, wrote all the songs and did all the arrangements.   When I got done the songs that are on HAUNT resignated with me as being personal chapters out of my life.  So, I decided to put it together as an album.  I was in a horrible car accident at end of NOV 2013 when it was released so I didn’t have a chance to market it, but it kinda found it’s own way through AMAZON, ITUNES and a ton of other places online including SPOTIFY where it’s been downloaded over 12,500 as I am writing this.

What is your recording setup (hardware and software)? What devices/programs would you ultimately like to utilize in the future?

Haunt was recorded in a normal studio up in Syracuse New York.   I played all the instruments myself, wrote everything and mixed them all.   But, I a am now diddling with ABLETON, MIXER and other online software.

How has your style evolved and changed over the time since you first picked up an instrument?

I’m always trying different things with music.   On HAUNT, you can hear so many kinds of different music but for some reason they all seem to make sense on this album.

Well I got over 2500 likes on my Haunt page on iwant2behuman.com and Like I said over 12,500 hits on spotify.  But you can go to youtube and type Michael Blaney and any these three songs  DON’T CALL ME AN ANGEL, TOMATO and RAINSTORM are downloaded     As well myself and my business partner Chris Purvis and his awesome electronica album, both are available for $1 download at www.iwant2behuman.com/store/   Michael Blaney’s HAUNT and his SPUNKMEYER BROWN AND HALF DEATH.

How can listeners contact you and find snippets of your music?

I answered that above opps!  But for my business partner SPUNKMEYER BROWN AND HALF DEATH you can go to youtube and find RITUAL, SUDDENLY SWEET and VAPOR PILL or you can go to spotify.com

You are a very busy man. How does your music interact with your variety of other pursuits?

Music is something I love, I love to write, but I also love to push creative people.  Like JESSICA SHORES aka J SHO is someone I really believe in and I am trying to do my best to get her seen and heard.   She’s awesome.

That’s a loaded question.  I have my kids book franchise FROGULEY going.  I have second part of my autobiography coming out.  I have three script submitted by my literary manager who is also a film producer Michael Meltzer.  I have another screenplay I want to write.  I am working on a huge double album like nothing before called CHRONICLES OF AN UGLY SUPERSTAR.  My huge mega webstite www.dreamlighthouseproductions.com which has everything you can think of.  And trying to push Jessica Shores aka J Sho and SPUNKMEYER BROWN AND HALF DEATH music.  My business partner has as couple scripts out and a new book called RUBICON HOLLOW he’s excited about and a new album in the works.  And we are trying to raise funds for my producer Michael Meltzer movie CONFEDERATE ZOMBIES.  And then some.

Do you have any final thoughts for our readers at NeuFutur?

Chris Purvis and I did the site so people could find a place to express themselves whether it be talent or thoughts.  The second page www.iwant2behuman.com has a music, book, art and open blog community for people to put up their creative stuff which might not otherwise get heard and we page for advertising.  Thanks you, Michael Blaney