We are speaking with Matt Greenfield about Destroy Cleveland. You’ve had a considerable career in creating your own music. What inspired you to create a documentary about Cleveland hardcore?

I have been interested in Cleveland hardcore for a long time. Just wanted to do something new and interesting. I was really bored and the thought of making this movie popped in my head. If I wasn’t making the movie, I would probably be it’s biggest supporter.

Creating a feature-length documentary is a difficult process. What sort of assistance did you receive in the creation of the doc?

Jorge Matthew Delrosa and Colby Grimes are my partners in this film. Without them, there would be no movie.

Were there any individuals that you could not / were not able to interview?

There are a lot of wild stories in Destroy Cleveland. What would you say is the most raw/interesting narrative you heard during your interviews? 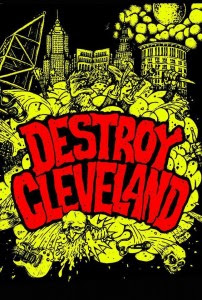 People will have to wait for the movie to find that out! Actually, Tony Erba has a great H100s tour story and Wedge told it too.

Are there any plans to release a soundtrack capturing some of the bands covered in Destroy Cleveland?

Probably not. My hands are already tied up in a bunch of different projects.

What topics would you like to cover in future documentaries?

That’s a great question. I’m not sure yet but probably more music from Ohio.

How can individuals find out more information about screening dates and the feature’s availability?

Check out “Destroy Cleveland” on Facebook and Twitter. I also run www.rustbelthammer.com and am pretty easy to get ahold of on both. Book me in your city!

Finally, when should people expect Destroy Cleveland to be released, and what are your plans regarding a screening?

July 24th is the premier in Cleveland. I will be showing it all over there country after that. It will be a great and exhausting year of promotion.