There is a certain richness to the sound created by the Monster iSport Freedom Bluetooth Wireless headphones that put them head and shoulders above other similar wireless headphones and headsets that are on the market. The noise-isolation technology works perfectly with both ways – the outside music and ambient noise is wholly blocked out to ensure that users will only hear their audio, while the iSport Freedom blocks the music and voices from the headset from being heard by individuals around the area. 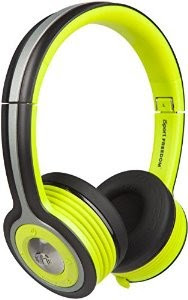 Perhaps the most surprising part of the iSport Freedom headphones is their lightness; while other products are bulky and heavy, there does not seem to be any trade-off between functionality and cutting weight for these headphones. The sport designation is warranted as the headphones can stand up to any amount of sweat or vigorous exercise without having the headphones cups break down or the operation of the headphones decreased in any way.

The Bluetooth functionality present in the iSport Freedom makes these headphones particularly versatile, making it a cinch to sync up with one’s smartphone; the included toggle switch will allow calls to be picked up as well as providing users with additional playback and volume controls. The most innovative part of the Monster iSport Freedom headphones has to be the high-visibility coloration on the cups. This allows those exercising at night the ability to listen to music while making their positions known to motorists. We were able to try out the headphones during a wide variety of fitness activities – weight training, running, and biking – and the headphones did not cause any sort of discomfort or issues evens after an hour of training. The Monster iSport Freedom headphones are perfect for those that take their training seriously and require a pair of headphones that will not cause neck or ear pain.

For a greater amount of information about the specifics of the iSport line check out the Monster domain; further news about the company’s products is available at their Facebook or Twitter.