French Toast Crunch is a cereal that first debuted in 1995 but the cereal was taken off of shelves in 2005. Fast-forward about 10 years and General Mills has heard enough public outcry to release the cereal yet again. The cereal is going to be rolled out at the national level first starting in January 2015 and will run around $3.50-5.00 for a box. The cereal is precisely like I remember with the perfect amounts of hearty and sweet. 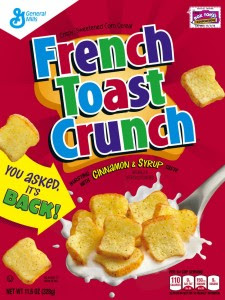 This is precisely the sort of cereal that one would eat if they feel that some of General Mills other efforts such as the classic Cinnamon Toast Crunch as a little on the sugary side. The cereal itself holds up perfectly in milk providing a much more nuanced and deep set of flavors. However there is a sense that one can eat the cereal dry for a perfect mid afternoon or late-night snack. The successful letter-writing campaign that ultimately guided French Toast Crunch back on the shelves should be seen as the fashion in which individuals that like products that are sadly defunct should attempt to have their voices heard.


French Toast Crunch
Posted by NeuFutur Magazine at 5:14 AM