Plastic is an engrossing film that has the perfect blend of up and coming actors. The casting of Plastic is incredibly solid establishing a dynamic between the lead actors that lends the film an honesty that few titles are able to provide their viewers. Together with intelligent casting choices, Plastic as a film that is extremely visual – the steps that are utilized in progressing the plot during the film are realistic while still providing viewers with important cues to further the action of the movie. The video quality of this DVD release further establishes the authority of these set choices, as a few viewings will increase one’s ability to see everything that the director intended to be inserted into the title. 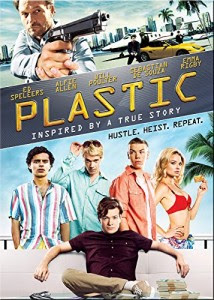 The audio quality of this release of Plastic as incredibly strong as well which means that viewers will be able to discern every line of dialogue that is spoken by the cast. The film approaches the gangster / heist genre in a fresh and interesting way, a move that gives this title considerable legs and terms of its replay potential. The film possesses some extra features as well, with the cherry on the top being a “Making of” featurette that pulls the veil from viewers’ faces and shows them a rare look behind the scenes Make sure to visit your local movie store for the DVD release of Plastic one should look to spend about $10-15 on the release. Make sure to visit their entertainment website at www.arc-ent.com/ for additional information about their slate of films for the end of 2014 and the beginning of 2015.


Plastic DVD
Posted by NeuFutur Magazine at 4:55 AM