Look At Me is the first track on Paul Maged’s latest album, Diamonds & Demons and will capture the attention of listeners through vocals that possess hints of Billy Bragg and Tim Armstrong. Maged’s main contribution to music is having a hard-nosed set of vocals that elicit comparisons to punk and the protest tradition while having absurdly catchy heavy rock arrangements. Taken together, these disparate units make for an album that is spontaneous, fun, and will always impress. Cause & Effect builds up the momentum with a rapid tempo and supersonic vocals laid down by Maged; a funky, jam band—esque style can be heard in the periphery of the track. 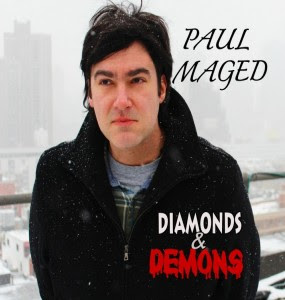 Love & Loss In The Western World begins with a guitar line that will immediately command attention, which is paired with a tempestuous and darkly emotive guitar/drum dynamic. This late-album effort gives Maged a canvas on which he can expand upon a hard rock meets progressive style. Each of the tracks on Diamonds & Demons could easily make it onto rotation on rock radio stations; Maged’s talent is such that there are enough twists and turns taken here that listeners will have to spin the disc multiple times to hear everything that was committed to recording. 64th & 1st needs little more than Maged’s vocals and a piano, but the narrative that is created here is considerably greater than its constituent elements. Maged’s sophomore effort is available from Amazon, iTunes, and CDBaby – Maged’s domain has ample information about his music, comedy, tour dates, and samples from his latest.

Top Tracks: Love & Loss In The Western World, Cause & Effect