There is virtually no way that individuals can guess that Dawn is Steve Henrichs’s debut album. The deftness and skill that he brings to each violin, piano, and synthesizer line he lays down with collaborator Eduardo Del Signore will have listeners presuming that he is a grizzled veteran. The fact that Dawn is Steve’s first album bodes well for his future prospects, as he is able to establish a considerable array of different sounds and elicits many feelings during the compositions contained on the album. There are a number of different musicians with which Henrichs works, and I feel that the most telling indicator of his future success has to be how well he is able to make the distinct elements on each track work. Throughout Henrichs’ corpus of work, there are so many distinct and potentially conflicting contributions that are guided by Steve’s cool hand into something that is decidedly greater than the constituent performances. 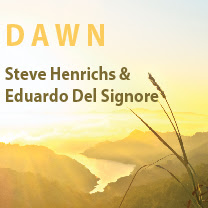 There is a sense that Henrichs has some deep roots in jazz, and makes no bones about it – his music is dotted with arrangements that would work perfectly in 1950s-1960s New York City or Paris, with a level of warmth and flawless recording that can only be done today. The most impressive contribution made by Henrichs has to be in making these older styles of jazz relevant for a current and contemporary audience; a number of individuals, even if they like contemporary jazz and similar sorts of genres, find it hard to sit patiently through a Kenny Dorham or a Hank Mobley composition. With Henrichs’ music, there is a certain crossover appeal – the arrangements may not sound similar to popular music of today, but they will be something that fans of that style of music can appreciate.

Henrichs keeps active online at www.stevehenrichs.com/ and at a wide variety of social media sites (Facebook, Twitter, Google+); bookmark his domain and add him on these SNS, and one will be ahead of the curve when it comes to new songs, tour dates, and any other Henrichs-based information. He has just released a new single for December, Dream; the cut features guest vocals laid down by Magaluna Ramos and will be sticking around listeners’ minds and hearts for months after they have initially played the track. Individuals can purchase Dawn from Henrichs’ website for $12.97 and shipping costs.