Get On Up Blu-Ray Set Review

The story of James Brown is tremendously interesting if one would choose to read a biography. However get on up is a compelling and always interesting film replete with talented actors no matter whether they are large forces in the Hollywood such as Dan Aykroyd or up and coming stars like Chadwick Boseman (42, Captain America: Civil War). Boseman’s role as Brown showcases all the glitz and glamour and the tumultuous times that Brown experienced in his Hall of Fame life. 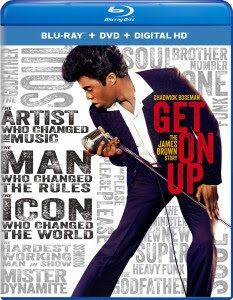 This biopic is similar to a the portrayal of Johnny Cash or Ray Charles presented in Walk the Line or Ray. There is a stellar cinematography that is present through the entirety of Get On Up, something that is bolstered through brilliant set design and costuming, hairstyles and parlance, and the like. Beyond the feature film there are a number of Blu-Ray exclusive featurettes.

The additional scenes that are restored to the film provide considerable context for the actions taken by the cast while the snippets that are in Get On Up are restored to full performances of the tracks. The documentary that links together Brown with Hollywood royalty is perhaps the most compelling while additional features that are present on the DVD release as well including the commentary that is laid down with the director, Tate Taylor, make this a must purchase. The Blu-ray set that we reviewed contains the main presentation along with DVD and digital component – no matter what set up one has, there is a version presented here. There is also a standard DVD edition that is available. Both versions of Get On Up are available from a wide variety of brick and mortar and online locations. This is a must purchase for anyone that is a fan of musician biopic and of period pieces.


Get On Up Blu-Ray Set Review
Posted by NeuFutur Magazine at 8:44 AM